Everybody loved Angelo. He was always singing in the high school hallways, with or without his guitar. His default setting was “happy” and he made everyone around him feel good. He was encouraging to all, he was a flirt, he was a goofball. As a junior, he was voted “the person who was going to be the best senior ever”. Everybody at school loved Angelo.

Angelo didn’t live long enough to become the best senior ever. On the eve of April Fool’s Day, Angelo hung himself in his home.

“It didn’t feel real. When I heard about Angelo killing himself, I thought it had to be an April Fool’s prank,” Carmen said. “I was in total shock. I had just messaged him on Facebook the night before. How could he be dead?”

Like so many other students at the high school, Carmen was friends with Angelo. And like so many others, she had no idea that he was struggling with a secret that he ultimately felt he couldn’t live with any more.

The night of his suicide, Angelo had written two long posts on Facebook, one coming out as gay, the other about being depressed. Carmen had messaged him, supporting his courage in coming out and letting him know that she was there for him. He messaged back about how much that meant to him. He intimated nothing about killing himself.

“We had no idea that Angelo was gay,” Carmen said. “He wrote love letters to my friend and flirted with us all the time. That must have been his way of trying to hide it.” She wished that he had reached out to someone, and was surprised that he hadn’t because the school promoted a supportive and inclusive community for gay and lesbian classmates. But some individuals did not feel that way; they wrote nasty responses to his Facebook posts that night. Whether it was this cyber bullying or fear of disappointing his parents that drove Angelo to kill himself, no one knows.

“The funeral was incredibly sad,” Carmen said. “There were so many people there. We were all hugging each other.” It brought into focus for her how important it is to have a loving, supportive community of friends and the brutal realization of what feeling isolated and alone can manifest. She didn’t want anyone else at her school to go down that dark path.

Carmen got together with her friend Kayla, both freshmen at the time, to figure out something they could do that might help some of their classmates. The girls found inspirational quotes to be particularly meaningful for them. So, they decided to write their own notes of encouragement. They met at a local yogurt shop where they cut up colored pieces of paper and crafted over thirty messages. Then they walked around several neighborhoods, putting the messages in mailboxes of fellow classmates. Some kids they knew, some they did not. They signed the notes “From 1 Spartan to another.” (Spartan was the school mascot.) They wanted to remain anonymous. “These notes weren’t about me and Kayla. There were about supporting community.”

They had no idea if their notes would make a difference to anyone, but the act of reaching out helped them immensely. “We were just two little freshman wandering around the neighborhood trying to make people feel better. It helped us feel better too.”

The next day on Instagram, Carmen saw a post with one of the notes she and Kayla had crafted. The post read: “To whoever left this on my door, thank you so much. It made my night. We are all so lucky to be surrounded by such beautiful people at our school.” A picture of the note was included in the post:

“You were given this life because you are strong enough to live it. Remember: when you are down to nothing, it will get better. From 1 Spartan to another. You are loved.”

“It felt really good to see that post,” Carmen said. The girls knew they had helped at least one person. They had made a difference in somebody’s life. And they hoped that their messages touched others too, in ways they may never hear about. 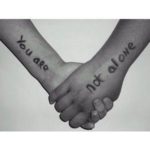 Carmen and Kayla didn’t have the answer for how to prevent more teen suicides in their school, but that didn’t stop them from doing what they could to reach out, to give encouragement and support, to tell kids that they mattered. And for one young woman, that message came at just the right time.

“This showed me how important it is to come together and to make sure people know they are loved and valued,” Carmen said. “The smallest thing can make the biggest difference.”

It’s heartbreaking that Angelo wasn’t able to experience all of the love and support that his friends had for him when he needed it most. He had always given so much to others. Carmen and Kayla feel that they were able to share a bit of his loving spirit with others through the notes they created and shared. They wanted their messages of hope and love to lift students’ spirits in the same way that Angelo had done with his songs, his silliness, his smile. “Angelo made me feel special,” Carmen said. “I just want to pass that on.”

The suicide rate in the United States has seen sharp increases in recent years. Studies have shown that the risk of suicide declines sharply when people call the national suicide hotline: 1-800-273-TALK.